I have took advantage of the presence of the judge Bart van Lierop, President of the Consultative Council of European Judges, following the conference on “Opinion no 17 (2014) of the CCJE on the evaluation of judges’ work, the quality of justice and respect for judicial independence – inter-professional dialog bridge in the evaluation of judges and prosecutors of the Romanian Judiciary in a democratic society”, conference organized on 27 -28 April 2015 by Superior Council of Magistracy and the representative of Romania in CCJE, Mrs. judge Ph.D in law Rodica Aida POPA, in the Aula Magna of the National Institute of Magistracy.

Ioana Livescu: First of all, can you please tell us your public opinion about this conference? 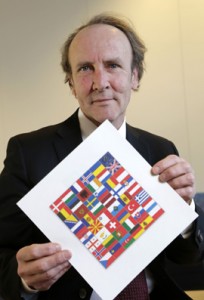 Bart van Lierop: This conference demonstrates how important it is to look at things from an international perspective. It helps to understand your own position when you compare it to other positions and I think this conference was very good because all participants discussed very frankly their point of view. Two topics came out for me, but I am just an observer… Firstly is a good thing to have evaluation of judges but we have to think about how we do it. Perhaps we should do it less rigid, less formal, less cumbersome. Secondly it was very, very important to emphasize that the judicial system communicates with society and with the mass media, especially in these days where mass media are sometimes very critical towards the judicial system. Mass media should not falsely inform the society, constantly. There is no need of propaganda, just to report the facts with objectivity. These two elements came out of me in this discussion.

Ioana Livescu: In the view of Opinion no 17, informal gathering of information on a judge candidate for promotion can be seen as an informal evaluation. In Romania, for the first time this year, were solicited opinions from lawyers (via Bars) on candidates for the posts of the High Court of Cassation and Justice. Do you think that it should be given a greater weight in evaluating lawyers opinions on ethical behavior of magistrates evaluation (expressed institutionalized or through anonymous surveys)? How can these be relevant for the correct evaluation of judges?

Bart van Lierop: That’s a very difficult question and I really think that it depends on the culture and concerns from a country. If there is in a country opposition and antagonism between lawyers on one hand and the judges on the other hand, I don’t think it is a very good idea to ask lawyers for their opinion on judges. What we should do first is to improve the relationships between lawyers and judges through seminars in a manner that each profession to understand the role of the other profession. So, is it a good idea to ask lawyers for their input in the evaluation of judges? I’m not sure about that and I’m not sure if it’s a good idea to ask judges to give their opinion on the quality of lawyers.

Ioana Livescu: In the Romanian judicial environment was really appreciated the OPINION NO. 16 regarding relations between judges and lawyers to ensure quality and efficiency, by which CCJE reaffirmed that the exchange of common legal principles and ethical values of all professionals involved in the justice process, is essential for the proper administration of justice. Implementation of this opinion in Romania was made through a project initiated by Romania’s representative to CCJE – Ms. Aida Popa in collaboration with the National Union of Bars in Romania, Bars of Romania and the Court of Appeal. It is a successful project that put face to face judges and lawyers in a professional discussion on new Codes in criminal matters, and in a debate on the ethics of relations magistrates – lawyers, which didn’t exist until now. The JURIDICE.ro website, which I represent, has broadcasted live, with a large audience, debates on the stages of this project developed at a national level. Do you consider that such a project should be extended to other European countries where judicial systems are still in a process of adaptation to European standards?

Bart van Lierop: The answer is: Yes, yes, yes! Not only to countries where there is a transition to adapt to European standards, because all countries need to have a constant attention to improve the relations between the various actors in the justice fields: prosecutors, judges, lawyers, citizens, experts, forensic pathologists. All have to participate in understanding each other’s role, so to make a better justice system.