Nestor Nestor Diculescu Kingston Petersen (NNDKP) won the “Romania Law Firm of the Year” award at the Chambers Europe Awards gala, a hallmark event organized on April 22, 2022 by Chambers and Partners, one of the most prestigious directories dedicated to the legal services market.

This is the 6th time NNDKP has received this much-coveted award, within a 13-year time span since Chambers and Partners started awarding this distinction to Romanian law firms. This is also the second time NNDKP received this distinction for two years in a row (in 2022 and 2021, and 2013 and 2012), another first for the Romanian legal market. With this latest recognition, NNDKP remains the most awarded law firm in Romania by Chambers and Partners.

Ion Nestor, Co-Managing Partner of NNDKP: “We are honoured and proud to be the first firm in Romania to receive this prestigious distinction for the sixth time. This recognition from Chambers and Partners acknowledges NNDKP’s market-leading position and is a testament to the excellent work performed by our team and our strong commitment to our clients. I would like to congratulate each member of our team for their dedication and immense contribution to this success. We are also thankful for the support received from our clients and we will continue to stand by their side by offering high-quality advice.”

According to the guide, the firm “stands out in Romania for its market-leading presence” with a market observer noting that “the team is very good in finding solutions when situations become complex”.

During the period reviewed by Chambers and Partners for the latest edition of its guide, NNDKP continued to provide legal assistance and representation in some of the most notable projects in Romania, including:

– Ecolab’s all-cash acquisition of Purolite, estimated at approximately USD 3.7 billion and one of the largest transactions of its kind in 2021, both at global and national level;

– the sale of 80% of the shares of Safety Broker, the largest independent insurance broker operating in Romania and in the Republic of Moldova, to the Unilink group, the market leader in Poland;

– CTP’s Initial Public Offering (IPO) for the listing on the Euronext stock exchange in Amsterdam, to which NNDKP contributed as part of an international team of lawyers;

– the EUR 20 million financing for the AAylex Group’s expansion in Romania and its acquisition of Banvit Foods Romania;

– the RON 84.5 million financing granted to Rodbun by a syndicate of banks consisting of BCR, CEC Bank, Raiffeisen Bank and Banca Românească.

NNDKP won the “Law firm of the Year” award for Romania competing with four other reputable law firms.

This follows a string of noteworthy accolades the firm has received in the guide’s latest European edition. NNDKP was ranked in each of the 9 areas of practice research by the reputable guide in Romania, with 6 practices ranked Band 1, reconfirming our prime position on the Romanian business law market. In addition, 17 lawyers and consultants were singled out as leading professionals in their respective fields of activity, out of which 2 Eminent Practitioners and 14 Leading Lawyers.

According to Chambers and Partners, the Chambers Europe awards recognize a law firm’s pre-eminence in key jurisdictions in the region. They also reflect notable achievements over the past 12 months including outstanding work, impressive strategic growth and excellence in client service. They honour the work of national and international law firms across the region based on the research for the latest edition of Chambers Europe.

This year, law firms from 27 jurisdictions and regions received awards; also, distinctions were awarded for the following categories: Diversity & Inclusion and Pro Bono, for both law firms and individuals.

A list of the winners at the Chambers Europe Awards 2022 and of the shortlisted firms is available here. 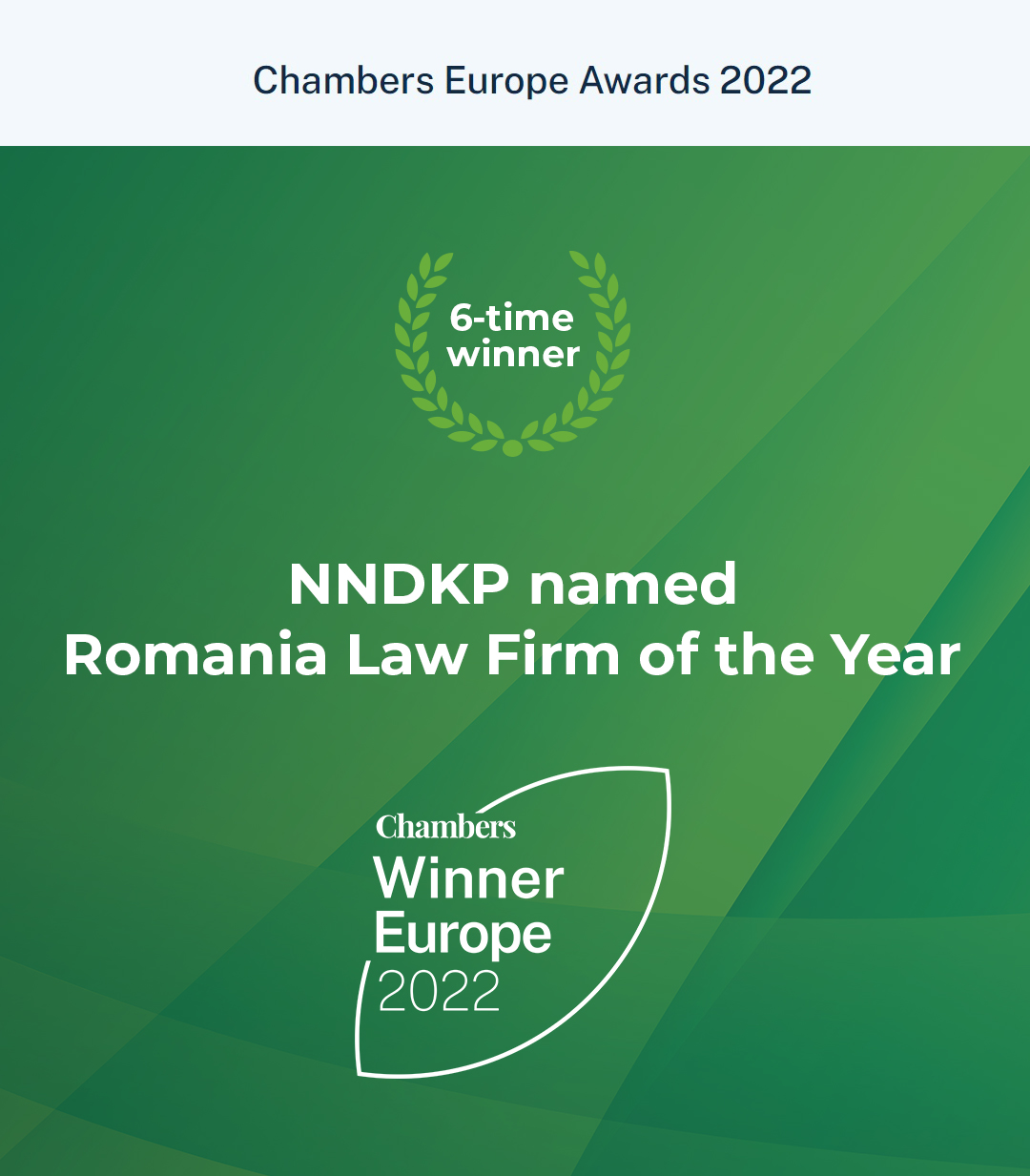 Nestor Nestor Diculescu Kingston Petersen is a promoter of business law in Romania and has been acknowledged, for more than 30 years, as a pioneer of the Romanian legal market. NNDKP offers full-service and integrated legal and tax advice to companies from diverse industry sectors. For the past three decades, NNDKP lawyers have provided expertise in landmark deals and projects in Romania, contributing to the evolution of the Romanian business environment, including in innovative and niche economic sectors that involved both international corporations and local entrepreneurs.

NNDKP represents Romania in some of the most prestigious international professional alliances – Lex Mundi, World Services Group, International Attorneys Club – and is a founding member of SEE Legal. The firm is constantly top ranked in all practice areas by the renowned international guides Chambers & Partners, Legal500 and IFLR 1000.