This brief was originally drafted for CIS Arbitration Forum and can be accessed through the following link.

On 30 March 2021, the Paris Court of Appeal annulled a 1.1 billion US dollars award against Russia in favour of the Ukrainian state-owned bank Oschadbank for the expropriation of its assets in Crimea.

The Court found that the Oschadbank’s investments did not fall within the temporal scope of the Russia-Ukraine 1998 BIT, and therefore the arbitral tribunal wrongly upheld the jurisdiction.

In particular, Article 12 of the BIT provides that “[the Treaty] shall apply to all investments carried out by the investors of one Contracting Party on the territory of the other Contracting Party, as of January 1, 1992.” The Court concluded that Oschadbank made its investments before 1 January 1992.

This article examines the background of the dispute and the grounds for the annulment of the arbitral award upheld by the Paris Court of Appeal.

Background of the dispute

Following the annexation of Crimea, Russia adopted a law on the peculiarities of functioning of the financial system of the Republic of Crimea during the transitional period. The law obliged Ukrainian banks in Crimea to continue their activity under certain conditions.

Further to these changes, the National Bank of Ukraine issued in May 2014 Resolution No. 260 prohibiting all Ukrainian banks from conducting banking activities in Crimea. Later that month, the Bank of Russia ordered the cessation of activities of Oschadbank in Crimea and appointed a representative to administer its assets.

Setting aside proceedings before French courts

In 2019, the Russian Federation filed the request to set aside the Oschadbank award. Among other grounds, Russia invoked that it got evidence showing that Oschadbank invested in its Crimean branch before 1 January 1992. Therefore, according to the Russian Federation, the award should be annulled as the BIT does not protect investments made before that date and therefore the arbitral tribunal lacked ratione temporis jurisdiction. Russia argued that although the Internal Regulations of the Branch in Crimea indicate that the Branch was registered on 2 January 1992, the branch existed and was already in operation long before that date. The State invoked that the registration of the Branch in Crimea was a purely administrative act, which in no way coincided with the date of the investment.

Furthermore, the Russian Federation stated that Article 12 of the BIT must be interpreted in this sense that, if an investment was made before this date, it could not benefit from the protection granted by the BIT. It also mentioned that the question of the date of completion of investment was a matter of jurisdiction and not of the merits escaping the control of Article 1520 of the French Code of Civil Procedure.

On the other hand, Oschadbank argued that the claim was inadmissible because the Russian Federation did not raise the ratione temporis argument before the arbitral tribunal and therefore it waived its right to invoke additional arguments in the setting aside proceedings. Additionally, Oschadbank stated that the objection was wrongly founded because it invited the Court of Appeal to review the substance of the dispute since the discussed matter related to the substantive protection offered by the Treaty and not to the jurisdiction of the Arbitral Tribunal.

The Court of Appeal found, based on internal documents of Oschadbank, that the bank commenced its operations before 1992. Additionally, the Court examined the scope of the temporal limitation.

The Court found that the terms of the aforementioned temporal condition were sufficiently clear to consider that it determined the temporal scope of application of the Treaty. Also, the temporal condition did not give rise to a right to both substantive and procedural protection to investments made before 1 January 1992. In fact, this tribunal made a precise distinction between Article 12 of the Bilateral Treaty investment which covers the temporal scope of the Treaty and Article 1.1 of this same Treaty which relates to the general definition of investment.

Therefore, the temporal condition laid down by Article 12 of the BIT that contains the arbitration offer is not satisfied. Thus, the arbitral tribunal wrongly declared itself competent to hear the dispute. On this basis, the Court annulled the award.

This judgment seems to be an important precedent for Crimea-related cases since most of them are based on the Russia-Ukraine 1998 BIT, in particular to those cases concerning the investments made in the early 1990s. Although this matter will likely be discussed before the Cour de Cassation, it still reflects an essential approach towards the temporal scope of the Russia-Ukraine BIT. 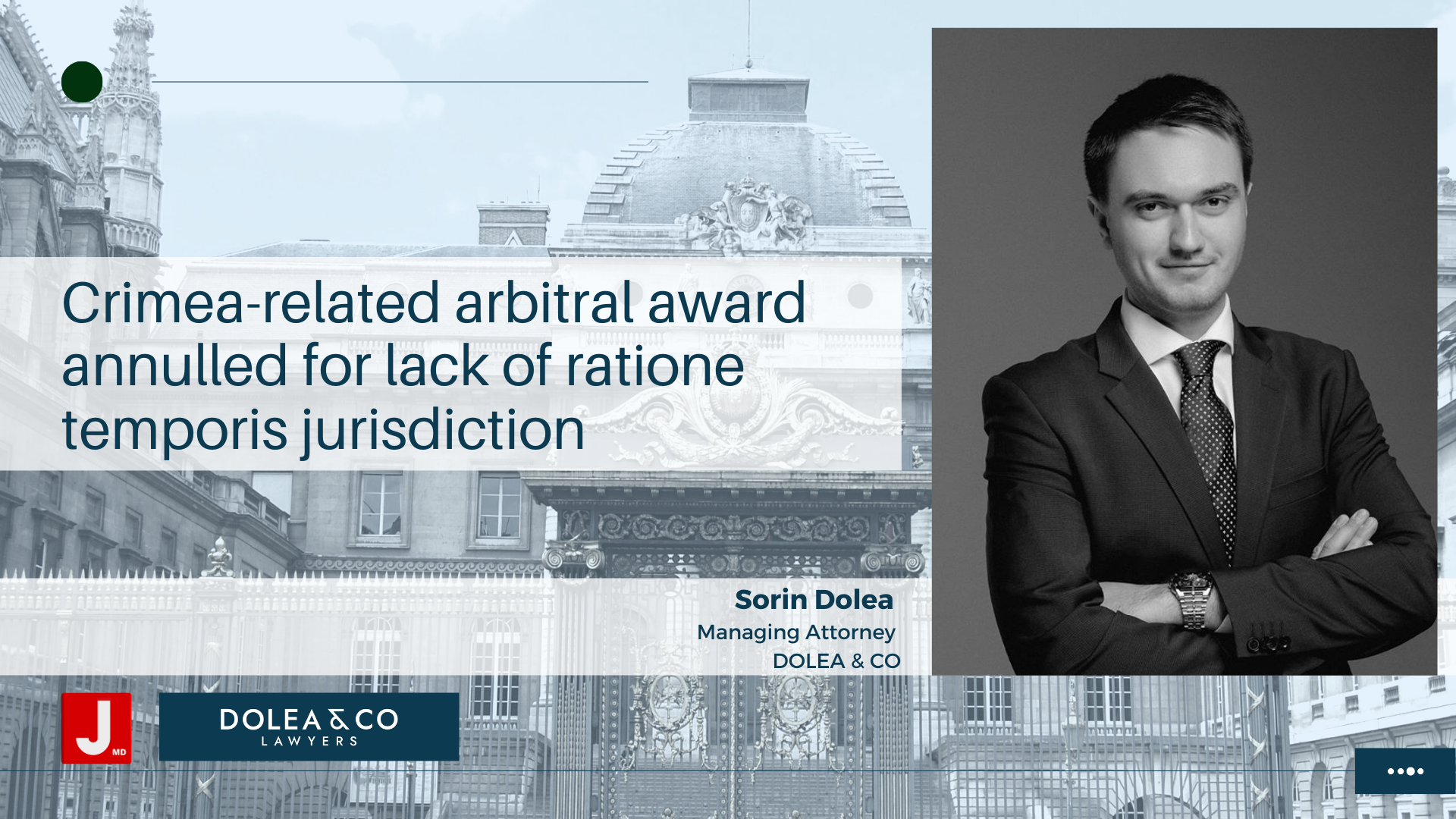