NNDKP has successfully assisted and represented a private company in a dispute resolved by the Bucharest Court of Appeals, concerning the requirements imposed on tenderers in a public tender procedure organized for the modernization of a Romanian railway line.

The dispute concerned the lawfulness of the manner in which the contracting authority made the submission of tenders conditional on the reconfiguration of certain pieces of equipment and software that had been previously installed at one of the railway stations. The station had undergone extensive modernization works during a previous project for the rehabilitation of a railway line part of the Pan-European Corridor IV.

Based on the findings of the Competition Council and practice of the European courts, the reliance on a certain manufacturer triggers a lock-in effect, which results in limiting competition.

In the specific case of this tender, the contracting authority chose to address the lock-in effect by transferring the responsibility for solving this issue to the tenderers, requesting them to include in their tenders the works that need to be performed in order to modify certain pieces of equipment and software for one of the railway stations. This meant that tenderers could not submit tenders unless they held intellectual property rights over the previously implemented software and hardware items, and that interested contractors/tenderers had to negotiate the costs of such works directly with the economic operator against which they were competing within the same tender procedure.

At the beginning of February 2021, the Bucharest Court of Appeals admitted the complaint of our client and ordered the contracting authority to modify the award documentation by adding the requirements for rewriting the software used for the respective station, with the observance of the principles of equal treatment, transparency, non-discrimination and free competition.

In line with the European jurisprudence, the decision rendered by the Court of Appeals sanctions the contracting authority’s approach to addressing the lock-in effect, and indicates that the approach does not comply with the principles governing public procurement procedures. 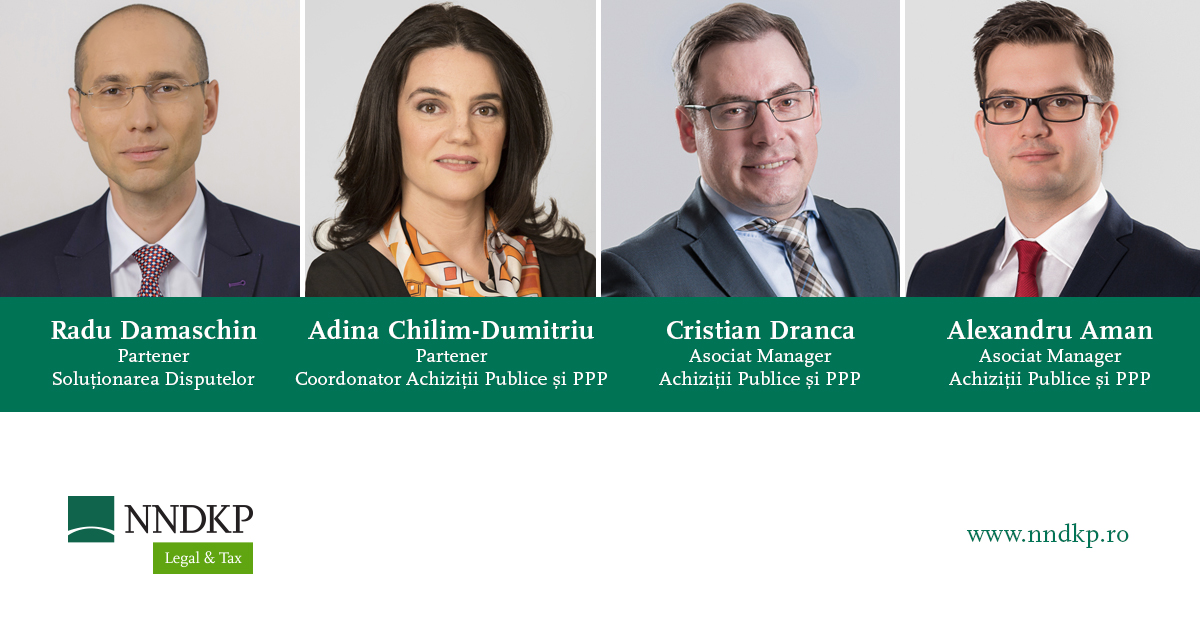 Radu Damaschin, Partner, Dispute Resolution practice: “The decision of the Bucharest Court of Appeals is anchored in a practice which, beyond the resolution of a specific dispute related to a certain award procedure, institutes new dimensions of the principles of equal treatment and free competition in the area of railway rehabilitation and modernization. We are extremely pleased with this professional achievement, in a case that entailed elements specific to the Romanian law, landmarks of the European practice, as well as purely technical components. I would like to thank all my colleagues who participated in this project for their efforts.”

Adina Chilim-Dumitriu, Partner and one of the coordinators of the Public Procurement and PPP practice: “This decision marks a significant milestone in which concerns the projects for the rehabilitation/modernization of railway lines (and not only), which may entail a sequential implementation, in several stages (based on the allocation of the required funds), and, of course, may include lock-in elements, the resolution of which, unless done in accordance with the principles of free competition, may result in punishable anticompetitive elements. We are pleased to have contributed to the development of jurisprudence in this field.”

Over the past two decades, the members of NNDKP’s Public Procurement team have provided assistance in connection with some of the most important projects developed in Romania across sectors, including infrastructure, constructions, transportation and logistics, or health. In 2020, NNDKP’s team had a +90% success rate in the public procurement disputes in which it has been assigned on. Our Public Procurement team is acknowledged as one of the local market leaders, an indicator of this being the fact that our practice is constantly listed as a top tier group in the rankings prepared by prestigious international legal guides such as Chambers & Partners, Legal 500 and IFLR 1000.

Nestor Nestor Diculescu Kingston Petersen (NNDKP) is a promoter of business law in Romania and has been acknowledged, for almost 30 years, as a pioneer of the Romanian legal market. NNDKP offers full-service and integrated legal and tax advice to companies from diverse industry sectors. For the past three decades, NNDKP lawyers have provided expertise in landmark deals and projects in Romania, contributing to the evolution of the Romanian business environment, including in innovative and niche economic sectors that involved both international corporations and local entrepreneurs.

NNDKP represents Romania in some of the most prestigious international professional alliances – Lex Mundi, World Services Group – and is a founding member of the South East Europe Legal Group (SEE Legal). The firm is constantly top-ranked in all practice areas by the renowned international guides Chambers & Partners, Legal500 and IFLR 1000.