Clever Business Transilvania, an important independent media group in the Romanian market, owner of a number of TV stations (Look TV, Look Plus, Look Medica, Agro TV, Profit.ro), has recently announced it had completed the takeover of Prima TV, one of the most important TV stations in Romania.

Clever Business Transilvania which is owned by a Romanian entrepreneur, Mr. Adrian Tomșa, turned out to ȚUCA ZBÂRCEA & ASOCIAȚII for legal assistance services. The Romanian law firm fielded a team of lawyers led by Corporate/M&A and TMT partner – Cătălin Băiculescu who advised the client throughout the entire acquisition process. The deal was particularly complex given the fact that the seller of Prima TV was undergoing judicial reorganization. Our firm assisted during the negotiation of the sale and purchase agreement, as well as in front of the National Audiovisual Council and Romania’s Competition Council for obtaining clearance on the deal. As such, Managing Associate Andreea Oprișan from the firm’s Competition and Antitrust practice group was part of the multidisciplinary team acting in respect thereof.

ȚUCA ZBÂRCEA & ASOCIAȚII regularly advises companies active in the advertising, media/broadcasting and entertainment industry, as well as telecommunications and technology companies, suppliers of IT services etc, on legal matters pertaining to their operations on the Romanian market (i.e. transactional and litigation, as well as regulatory/compliance issues affecting these companies, including interconnection agreements, licensing, procurement, competition and regulatory investigations). 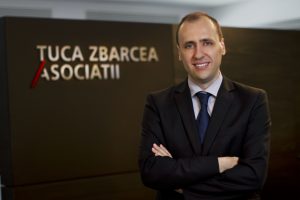 Corporate/M&A and TMT star partner Cătălin Băiculescu has extensive experience in the entertainment and media sector, providing services to radio and television broadcasters and production companies on regulatory issues and commercial contracts relating to television shows, advertising, and internet exploitation of audio-visual content. He has also advised on telecommunications service agreements, interconnection agreements, software development agreements and licenses, outsourcing agreements, as well as data privacy related issues. Cătălin is ranked in the top echelon of the profession for his expertise in these areas by reputed international legal directories such as Chambers Europe, Legal 500, Media Law International (MLI) etc. According to the Chambers Europe’s editors: “The “responsive and problem-solving” Cătălin Băiculescu is highly praised by clients for his “outstanding negotiation skills.” One interviewee also appreciates that he “can translate the specific legal jargon, so that his advice is always clear, objective and instructive.” He actively handles transactions in the media and entertainment industry and advises on sensitive regulatory mandates” (Chambers Europe 2020 edition).