The market capitalisation of the 100 largest listed companies in the world declined by 15%, representing USD 3,9 trillion în Q1 2020, because of the COVID-19 pandemic, after an increase of 20% in March – December 2019, according to PwC’s Global Top 100 companies. The companies in the Oil & Gas sector were hit hardest.

As a result of this evolution, between 31 March 2019 and 31 March 2020, for which the ranking is made, the market value of the 100 largest listed companies in the world reached USD 21.5 trillion, 2% up from the previous corresponding period. 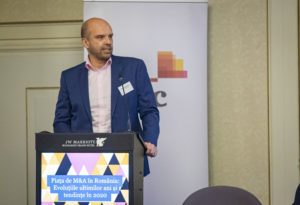 Dinu Bumbăcea, Partner and Advisory Leader of PwC Romania: ”Clearly, this medical crisis has led to a short-term decline in the performance and market value of many companies, which is likely to have a negative effect in the medium and long term as well. In the three months to March 2020, the market appears to have picked winners and losers in terms of sectors. Although we see losses across the board, the negative impact has obviously been stronger for the financial and oil and gas industries. It is clear that public market investors are becoming more cautious of high risk valuations and focus on companies which generate profit and cash.”

Energy and the financial sector, the biggest declines. At the opposite pole, utilities, technology and health

In the first three months of 2020, all sectors declined. The most affected was oil and gas, down 37%, followed by finance by 23%.

The smallest decreases were registered by the utilities companies, of 1%, technology, which lost 11% of the market capitalization, and by the consumer service companies, with minus 6%. The latter’s evolution was supported by the 16% (USD 23 billion) growth of Netflix, one of the ten companies whose market value increased during that period.

Saudi Aramco joined the Global Top 100 this year having undertaken the largest IPO in history in December 2019. Saudi Aramco entered the list in first position and has retained this position ever since, with a market capitalisation at 31 March 2020 of USD 1,6 trillion.

Sorin Petre, Partner PwC România: ”As a result of the rapidly developing global pandemic (COVID-19), key global stock exchanges suffered their worst intraday falls in March 2020 since the 2008 global financial crisis. In the same month, market volatility reached its highest levels since the global financial crisis due to the unprecedented impact of COVID-19 on global markets. This has caused significant distortions in the market over a short period, and the effects are still unfolding.”

Even with the COVID-19 disruption, the market capitalization of Microsoft and Apple each exceeded USD 1 trillion as of March 2020. The performance of Amazon, placed on fourth place, was boosted by a surge in demand created by movement restrictions.

The world’s top 10, made up mainly of technology and e-commerce companies, is completed by Alphabet, Alibaba, Facebook, Tencent, Berkshire and Johnson & Johnson.

Even with the impact of COVID-19, Tesla was the biggest riser in the three months to March 2020, of 28%, at the opposite pole is Citigroup, with a decrease of 49%.

The US continues to dominate at the regional level

For the sixth consecutive year, the US ranks first, having more than half (57) of the companies in the top followed by Europe, with 21 companies, China and its regions, with 12 companies.

By region, European companies in the global Top 100 experienced the most significant reduction in Q1 2020, by 25% (USD 956 billion). The market capitalization of American companies in the ranking decreased by 14% (USD 2.2 trillion), and that of Chinese companies by 11%. Brazil, Australia and South Africa no longer appear in the ranking, after the exit of Petrobras, BHP and Naspers.

The value of unicorns is growing

The outlook for unicorns remains positive in the medium term. Some public companies have seen a surge in demand since COVID-19 took hold which has translated into valuation growth, particularly technology / technology enabled and health care businesses – sectors where unicorns are well represented.

”Unicorns are typically disruptors, whether through new technology, tapping into changing consumer trends or indeed broader societal changes. There will be opportunities to thrive if COVID-19 accelerates these changes”, shows Sorin Petre.

Similarly to the Global Top 100, the US dominates the Top 100 unicorns, representing half of the list in terms of number of companies and value, China ranks second with 26 companies and Europe is on third place, with ten companies, of which six from Great Britain and three from Germany.

The full report can be found here.