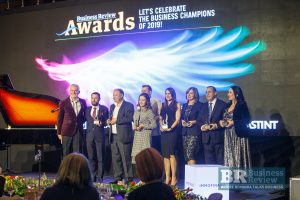 Nine companies received awards for their vision, business strategy and exceptional results obtained in 2019, while two individual awards went to prominent figures from the business and sports world.

ȚUCA ZBÂRCEA & ASOCIAȚII was named “Law Firm of the Year” at last night’s BR Awards Gala powered by the English publication – Business Review. The firm was a contender for the big prize alongside four other domestic and international law firms nominated for this category.

The “Law Firm of the Year” award was handed out by Fulga Dinu, Country Manager at Immofinanz, in recognition of the firm’s achievements in 2019, be it in relation to some of the most spectacular M&A deals (including cross-border) on the market or concerning complex financing projects, or litigation & arbitration case files. Also, two other business initiatives were singled out, namely ȚUCA ZBÂRCEA & ASOCIAȚII ’s collaboration agreement with Andersen Global in March 2019 and the partnership agreement with Trident Capital Investments. 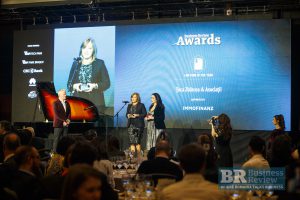 Attending the event, Raluca Vasilache, Partner and Head of the firm’s Competition practice group stated: “I’d like to thank the members of the jury, Business Review and, of course, our clients, many of whom are present here tonight. It’s an honor to receive this award, especially since our law firm was shortlisted in this category alongside four other reputed players. Any maybe it’s not a coincidence that we’ve been selected to win the Law Firm of the Year award at a time when ȚUCA ZBÂRCEA & ASOCIAȚII  is celebrating its 15-year presence on the Romanian legal market”.

The BR Awards Gala celebrates the business champions of 2019, with an independent judging panel deciding upon each winner, based on the submitted written nominations. This year, more than 150 nominations were received. 52 nominations made it to the final shortlist, but only 11 of those nominated took home the prestigious Business Review Awards trophy.

The full list of the BR Awards winners is available here.