Euromoney Legal Media Group held its first Europe Rising Stars Awards in a ceremony which gathered dozens of private practice lawyers from independent and international law firms as well as in-house lawyers from leading companies. The awards celebrate the achievements from the last 12 months of lawyers under the age of 40 from across Europe. Also, similar distinctions were handed out in 20 practice areas. 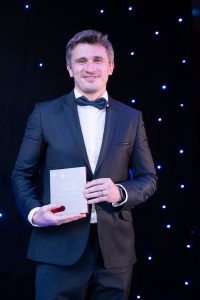 Ciprian Timofte, Managing Associate at ȚUCA ZBÂRCEA & ASOCIAȚII has been recognised as Rising Star for Romania further to his contribution to the firm’s data privacy, mergers and acquisitions, as well as capital markets practice groups. Over the past few years, Ciprian has gained invaluable knowledge as regards personal data protection issues, advising renowned Romanian and international companies active in diverse industries such as: telecommunications, banking and financial services, medical services, healthcare and pharmaceuticals, insurance, IT, e-commerce etc. Ciprian is a regular speaker to various events focusing on data privacy/GDPR (including events hosted by the Romanian Supervisory Authority for Personal Data Processing) and a regular contributor of articles to various publications, including dataprivacyblog.tuca.ro (ȚUCA ZBÂRCEA & ASOCIAȚII ’s blog regarding personal data protection and privacy). The Rising Star Romania Award adds to his other recognitions received over time in the field of personal data protection, mergers and acquisitions, as well as the capital markets.

Ciprian Timofte: “I’m very proud and honored to be among the winners of the 2019 Euromoney Europe Rising Stars in its inaugural edition. I had pleasant conversations with most of the shortlisted lawyers and I was glad to find that we share similar ideals, values, and similar concerns. I really felt the vibration and energy of the new generation of lawyers, already true leaders of the profession and, without a doubt, “tomorrow makers”. As for the award, although it is an individual distinction, I sincerely believe that it represents the fruit of a perfect synergy between passion and dedication, on the one hand, and an environment of professional and human excellence in which I have the opportunity to work, on the other hand.”