Friday, April 5th, 2019: Europe’s most active and innovative law firms in banking and finance, capital markets and M&A were celebrated at IFLR’s 20th annual Europe Awards held in London last night. According to IFLR, the event brought together some of the continent’s best legal talent to celebrate 2018’s most innovative cross-border European transactions and the teams that worked on them.

ȚUCA ZBÂRCEA & ASOCIAȚII brought home the “Most Innovative Law Firm of the Year in Romania” award for its work on the EUR 1.9 billion Sanofi/Zentiva – Advent International deal. 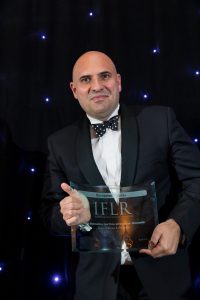 Commenting on the win, Gabriel Zbârcea, Managing Partner at ȚUCA ZBÂRCEA & ASOCIAȚII, said: “I am pleased and honoured to accept this award on behalf of my team. It is already the third accolade awarded for our work on the Sanofi/Zentiva – Advent International deal in the past couple of weeks. I could not be happier, as such recognitions are testament to the complexity of the project and its market impact not only at a European, but also at a local level. After all, Romania is home to Zentiva’s only manufacturing facility outside the Czech Republic. I would like to thank and congratulate all parties involved in this cross-border M&A – our client, as well as the dozens of lawyers across Europe who ran the deal very professionally. Above all else, however, the award belongs to our team of lawyers whose tireless efforts successfully contributed to the completion of the transaction, including Silvana, Sorin, Oana, Mihaela, Dominic, Ciprian, Bogdan, Mihai, Dana, Daiana, Ana, Florentina, Ovidiu”.

ȚUCA ZBÂRCEA & ASOCIAȚII previously won the IFLR’s national award for Romania in 2012 and 2016. In 2016, it also received the “M&A Deal of the Year Award” for its contribution to a USD 14 billion cross-border deal by which General Electric acquired the power and grid businesses of French conglomerate Alstom. Last year, ȚUCA ZBÂRCEA & ASOCIAȚII won the “High Yield Deal of the Year Award”.

International Financial Law Review – IFLR is the editor of the renowned “IFLR 1000”, the only international legal directory dedicated to ranking law firms and lawyers on the basis of financial and corporate transactional work.