ȚUCA ZBÂRCEA & ASOCIAȚII won a coveted Deal of the Year Award last night, during an awards ceremony held in Budapest. The event is organised by CEE Legal Matters, an international publication, and has gathered more than 90 lawyers from leading international and domestic outfits from the CEE region.

ȚUCA ZBÂRCEA & ASOCIAȚII and other five international law firms (CMS; Dentons; Freshfields Bruckhaus Deringer; Ropes & Gray; Kirkland & Ellis) were the winners of the 2018 CEE Deal of the Year Award, for their work on the Sanofi/Zentiva – Advent International deal.

In addition, the same firms received a second award – the Czech Deal of the Year Award for the Sanofi/Zentiva – Advent International transaction. 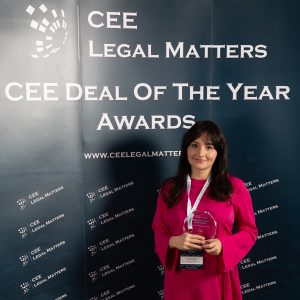 Commenting on this award, Silvana Ivan-Hanganu, Partner at ȚUCA ZBÂRCEA & ASOCIAȚII and head of the firm’s Capital Markets practice group said: “The Advent-Sanofi transaction was significant in value (approximately € 2 billion), as well as by reference to the plurality of jurisdictions involved and the complexity of the legal strategy needed to reorganise the business (so that the GX component can be transferred and while also maintaining the internal operational flows on non-GX), the alignment of the global transfers and, last but not least, by reference to the capital market issues that we had to tackle, given that Zentiva Romania is listed on the Bucharest Stock Exchange”.

Finalists for the prestigious and peer-selected CEE Deal of the Year Awards were chosen by panels of highly-regarded private practitioners in each country, with winners determined by a second group of prominent legal experts from across Central and Eastern Europe. Deals submitted for consideration were signed in the 2018 calendar year, and the jury based their assessment on deal complexity, market (and regional) significance, and value, among other factors.

More information about the awards and a complete list of winners can be found here.