– Availability of key skills (50%) and changing workforce demographics (47%) lead, this year, the top of business threats to organization’s growth prospects;

– 38% of the business executives in Romania believe the global economy’s growth rate will slow down;

– Germany remains the top market for growth prospects of companies in Romania.

After five years when the percentage of CEOs in Romania projecting improved global economy growth rate was substantially higher than that of executives expecting a slowed growth rate, this year’s survey shows a reversal. Only back in 2012 and 2013 was the percentage of “pessimists” higher, when the Romanian economy was struggling to come out of a prolonged difficult crisis.

According to the PwC Global CEO Survey for Romania, 38% of the business executives in Romania believe the global economy’s growth rate will slow down. That is almost three times the percentage in last year’s survey (13%).

At the Central and Eastern European level, business executives have adjusted downward their forecasts for 2019 because of rising political and economic uncertainty in the region. 31% of the regional CEOs expect to see a decrease of global economic growth. Last year the percentage was only 6%.

CEOs’ concerns about a potential slowdown of the global economy growth rate translates into diminishing trust in the performance of their own organisations, both in the short and medium-term, and this trend is seen across the world. In Romania, the percentage of respondents saying they are confident in the capacity of development of their own companies over the next 12 months has decreased to 32%, from 38% last year, and 52% in 2017. Over the next three years, CEOs are less confident, compared to last year about their own company’s growth perspectives. Talking about Romania, less than a quarter (23%) of the respondents are very confident about the growth of their own organizations, nearly half the percentage registered at the previous edition.

Confronted with the new realities (populism, protectionism, labour market and trade barriers), organisations are looking inward and mainly relying on internal resources to drive revenue growth over the next 12 months. Around three quarters of CEOs are focusing on operational efficiency, and a similar percentage on organic growth. Around three out of every five-business executives worldwide and in Central and Eastern Europe are planning the launch of new products and services. The percentage of their counterparts in Romania planning to launch such initiatives to drive revenue growth is substantially lower (43%).

CEOs’ dwindling optimism has an impact on expansion plans outside their home territory. Given the volatile global economy and political hindrances to globalisation, business executives seem less certain about their plans for expansion outside their domestic markets. More than a third of the Romanian executives (35%) surveyed consider that the expansion becomes uncertain. Therefore, they don’t know what territories to nominate when they are asked what are their top three countries – other than the one where they are headquartered – for the development perspectives of their own organization over the next 12 months.

For Romania, Germany, with 30% of the respondents naming it, is the most important country for the growth perspectives, and occupies this position for several years. The percentage is lower than the 43% registered last year. Germany is followed this year, at considerable distance by France (12%) and The United States of America (10%, compared to 41% in 2018’s edition). USA is head to head with Great Britain and Bulgaria.

The US also sees a significant decline in response rate of the CEOs in Central and Eastern Europe (to 18% from 37% in 2018). That means Germany has again become the perceived best market for growth, although the percentage of CEOs naming it as attractive for revenue growth has decreased to 28% from 35% last year. China ranks third in the list of growth potential markets (18%, on a par with the US).

Escalating trade tension, heightened protectionism and the uncertain impact of public policy inherently cause the CEOs’ confidence and willingness to invest or take risks to drop. CEOs in Romania are more concerned than their counterparts worldwide and in the region about the large number of potential threats to growth prospects. Inadequate infrastructure is the number one concern, as in 2018, with almost two-thirds (62%) of executives in Romania saying they are extremely concerned. The same percentage appears this year when it comes to uncertainty about public policy. The next two challenges, in the opinion of around half of the respondents in Romania, have to do with the workforce – the availability of people with key skills (50%) and the change in the workforce demographics (47%). Business executives in Romania are focusing their attention on ways for their companies to adjust to rising populism, which ranks last in the top five potential threats.

Of the broader societal risks, beyond the by now well-established threats on the minds of business executives in the region and in the entire world (geopolitical uncertainty and public policy uncertainty, over-regulation), CEOs in Romania have some specific concerns for 2019. They feel, to a significantly larger extent than their counterparts worldwide and in Central and Eastern Europe, threatened by inadequate infrastructure, volatile exchange rates and populism. 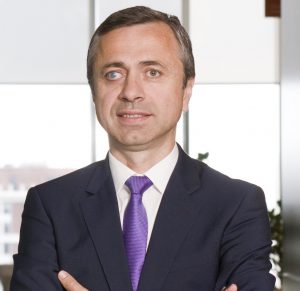 Ionuț Simion, Country Managing Partner, PwC Romania: “An insufficiently developed infrastructure causes, among other issues, costs and lead-times on orders to increase and Romania’s attractiveness to decrease in the eyes of prospective investors interested in developing new production facilities. The concern about the volatility of the exchange rate is well grounded, given the sharp rise in the euro against the Romanian currency since early this year. The business environment is very sensitive to many of the decisions that have influenced the economy over the past year. Transparency together with economic and legislative predictability are the most asked for elements during the dialogue with governmental decision makers. They are needed so that development of the Romanian companies and continuous investment plans could be done on solid bases.”

In terms of business-specific potential threats to companies’ growth, talent availability, technology and consumers are still the main challenges on the agenda of business executives.

Skills and information gap – the race for talent

In the age of technology, information rules. CEOs admit to struggling to get and manage the information they need for decision-making, and the reason is often the capability of their own organisations to generate adequate data. The information gap is still substantial, despite the massive investments made in the IT infrastructure over the years. Business leaders point to the fact that they still do not get enough of the relevant information they need to make major decisions about the stability and long term success of their businesses.

In the opinion of business executives in Romania, financial projections top the list of most important data (97%), followed closely by their organisation’s brand and reputation (95%) and by customers’ needs and preferences (93%). Information on employees’ views and needs (90%) ranks fourth in the top of critical data for decision-making. Like their counterparts in the region, more than eight out of every ten CEOs in Romania are interested in data on the tax risks arising from their decisions.

CEOs are aware of and manage data security and privacy risks involved in adoption of new technologies. 78% of business leaders in Romania affirm that their organization is cyber resilient, therefore, it can withstand attacks and recover quickly. At the same time, 87% of the survey participants say their organization is adapting the way it monetises data to better address data privacy and ethics.

As for attracting new talents, although they admit that finding key skills on the market is a growing challenge, and despite projections about technology displacing many jobs in the future, CEOs remain generally optimistic about the headcount increase in their organisations over the next 12 months. Hiring is no easy feat now that companies are engaged in a genuine talent “hunt” to cover their skills gap. As technological change continues to disrupt the ways the economy and wider society function, employees with digital and data analytics skills become rare and more sought after. The need for employees with “soft skills” remains critical though. 78% of the CEOs at the regional level consider that is more difficult to hire in their sector. Percentage is overwhelming at the Romanian level where 90% of those interviewed say it has become difficult to hire.

CEOs admit there is no fast-track solution when it comes to bridging the skills gap in their own organisations. Solutions derive more from long-term (and often costlier) approaches, as shown by the responses of business executives across all the regions covered by our survey. Retraining / upskilling and lifelong learning of employees is the preferred method for closing the skills gaps. CEOs in Romania tend to rely on a larger extent than their counterparts in the region on establishing a pipeline direct from education (27%), which is seen as the option of choice to narrow the skills gap within their organisations.

Ionuț Simion, Country Managing Partner, PwC Romania: “In order to get the most of the benefits of technology and globalisation, human resources should remain at the forefront. Acknowledging and making the most of the human factor in a world that grows ever more virtual and is engaged in a technology race which keeps changing our lives is an absolute must to ensuring long-term sustainable growth. Human resources strategies are under perpetual change, especially with automation and Artificial Intelligence always featuring high on the agenda of CEOs, who want ever more agile and versatile employees.”

Artificial Intelligence – how close the future is

To unleash the internal growth potential of their organisations, CEOs pay particular attention to developing the emerging technologies, such as Artificial Intelligence (AI). There has been a lot of talk in recent years about the business potential of the successful use of these technologies.  Of course, opinions are divided on how business executives see the impact of AI on society and on the role governments should play in developing Artificial Intelligence.

The views of respondents in Romania and in the region are slightly more moderate – Romania (76%) and Central and Eastern Europe (64%). Although they share the view on the impact Artificial Intelligence will have on businesses, most CEOs admit they have not introduced AI initiatives in their organisations. Percentage of CEE leaders (69%) and those active on the Romanian market (72%) saying they have not implemented AI outpasses that of their peers at global level (58%).

Things no longer seem so straightforward and clear when it comes to the expected impact of Artificial Intelligence on jobs. In Central and Eastern Europe and in Romania, CEOs are more pessimistic about this topic, with 56% and 60% of them, respectively, saying Artificial Intelligence will displace more jobs than it creates in the long run.

CEOs admit that Artificial Intelligence (AI) is good for society and will have a larger impact on the world than the Internet revolution. However, communication is necessary so people will trust it, while involvement of governments is essential for AI development. CEOs need to focus on pragmatic aspects – revenue and business growth, operational efficiency, addressing the information and skills gap, etc. This is why the advanced technologies that would create value and yield benefits should be introduced at a wider societal scale that would foster sustainable growth and prosperity. Each business will be facing AI challenges, but none will be able to address them on its own.

At PwC , our purpose is to build trust in society and solve important problems. We’re a network of firms in 158 countries with more than 250,000 people who are committed to delivering quality in assurance, advisory and tax services. Find out more and tell us what matters to you by visiting us at www.pwc.com.