Nearly 30% of business leaders believe that global economic growth will decline in the next 12 months, approximately six times the level of 5% last year – a record jump in pessimism. This is one of the key findings of PwC’s 22nd annual survey of 1,300 plus CEOs around the world, launched today at the World Economic Forum Annual Meeting in Davos. This is in vivid contrast to last year’s record jump, 29% to 57%, in optimism about global economic growth prospects.

Although, all is not doom and gloom: 42% still see an improved economic outlook, though this is down significantly from a high of 57% in 2018. Overall, CEOs’ views on global economic growth are more polarised this year but trending downward.  The most pronounced shift was among CEOs in North America, where optimism dropped from 63% in 2018 to 37% likely due to fading of fiscal stimulus and emerging trade tensions. The Middle East also saw a big drop from 52% to 28% due to increased regional economic uncertainty.

The drop in CEO optimism has also impacted growth plans beyond their own country borders. The US narrowly retains its position as the top market for growth at 27%, down significantly from 46% in 2018. The second most attractive market, China, also saw its popularity fall to 24%, down from 33% in 2018. Overall, India is the rising star on the list this year, recently surpassing China as the fastest growing large economy.[1]

“CEOs’ views of the global economy mirror the major economic outlooks, which are adjusting their forecasts downward in 2019,” said Bob Moritz, Global Chairman, PwC. “With the rise of trade tension and protectionism it stands to reason that confidence is waning.” 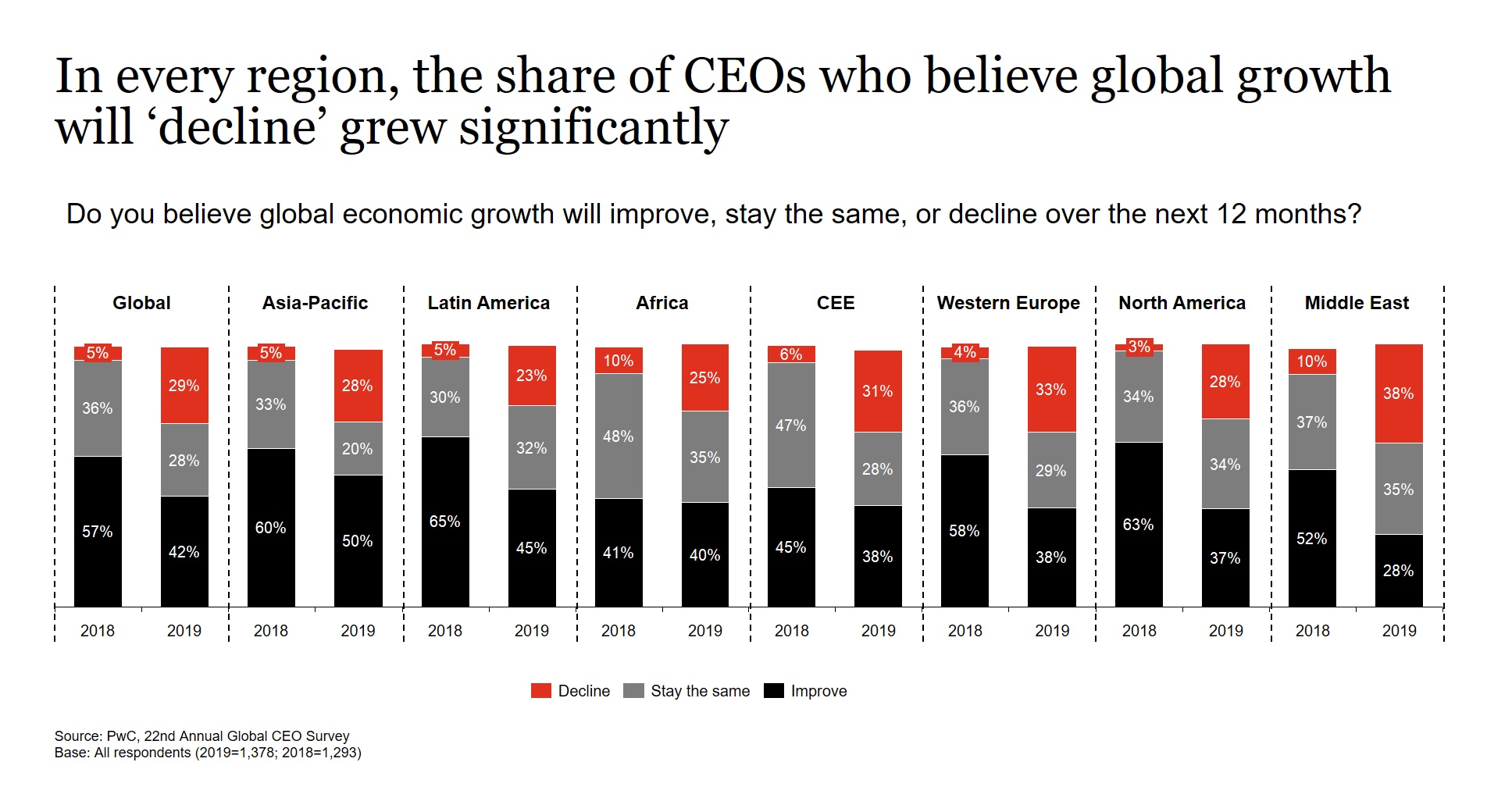 The unease about global economic growth is lowering CEOs’ confidence about their own companies’ outlook in the short term.  Thirty-five percent of CEOs said they are ‘very confident’ in their own organisation’s growth prospects over the next 12 months, down from 42% last year.

Also in Romania the percentage of the executives that are „very confident” in the growth perspectives of their own companies decreased from 38% in 2018 to 32% this year. 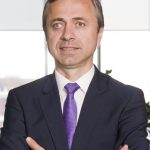 Ionuț Simion, Country Managing Partner, PwC România: “CEOs’ are still confident in the economic development growth, at the global level and also for their companies.  There are good premises for business development, but in order for this to happen we need a stable and predictable economic environment. This last characteristic is the central element on which many executives plan the growth and development of their business. It is of utmost importance to have a continuous dialogue between the financial and economic decision makers, on one side and the business environment on the other side, so that business development in Romania and other investitional programs could be done on solid grounds.”

– In China, dropping from 40% in 2018 to 35% this year – due to trade tensions, US tariffs  and weakened industrial production

– In Germany, dropping from 33% to 20% – due to trade tensions, slowing economy and risk of disorderly Brexit

– In Argentina, dropping from 57% to 19% – due to recession and currency collapse

– In Russia, dropping from 25% to 15% – due to decline in export demand, currency volatility and higher unemployment

To drive revenue this year, CEOs plan to rely primarily on operational efficiencies at 77% and organic growth at 71%.

Top markets for growth: Confidence in US continues despite significant dip

As a result of the ongoing trade conflict with the US, China’s CEOs have diversified their markets for growth, with only 17% selecting the US, down from 59% in 2018.

Threats to growth: Driven by economy, not existential 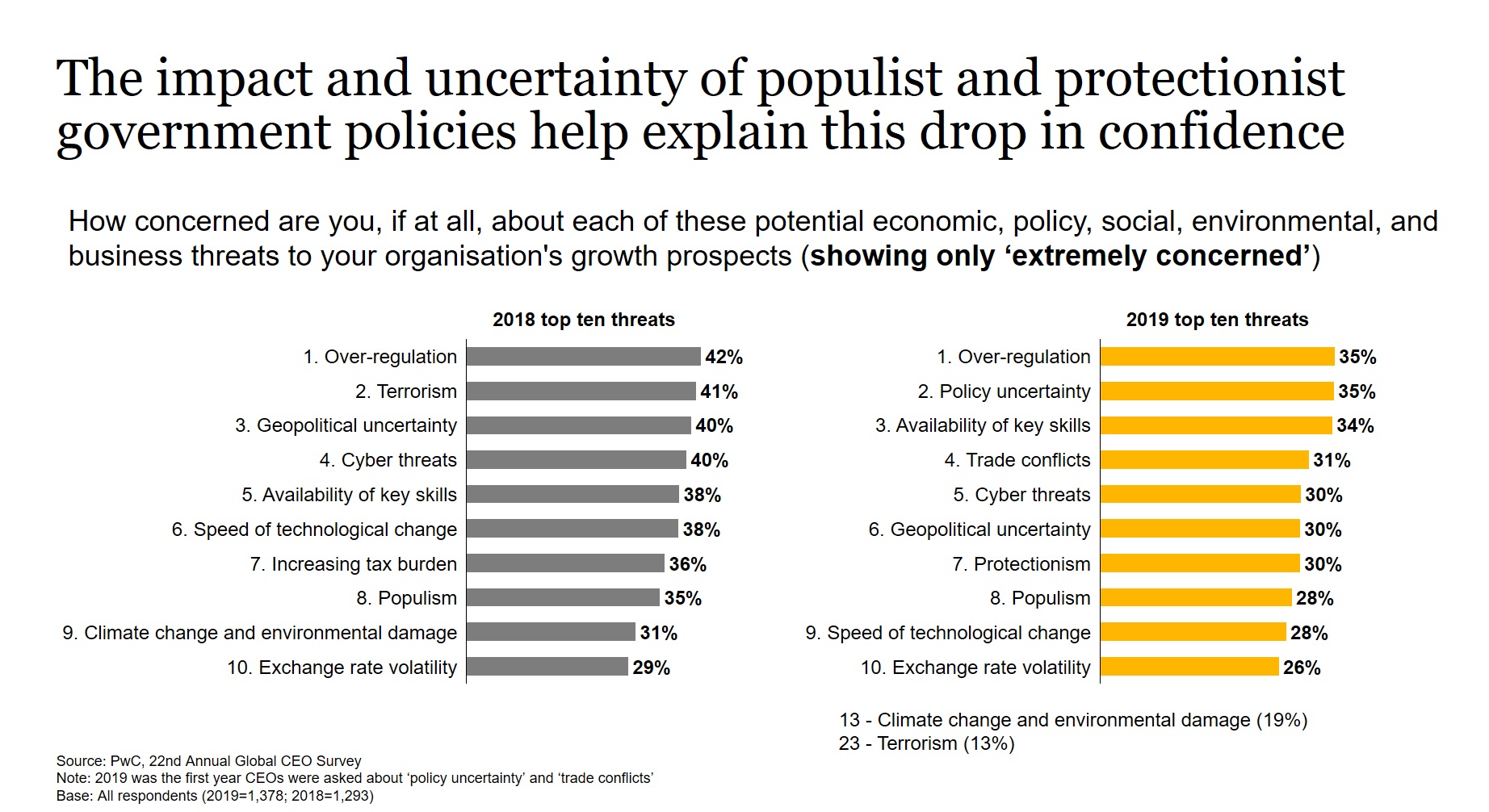 As indicators predict an imminent global economic slowdown, CEOs have turned their focus to navigating the surge in populism in the markets where they operate. Trade[2] conflicts, policy uncertainty, and protectionism have replaced terrorism, climate change, and increasing tax burden in the top ten list of threats to growth.

Of CEOs ‘extremely concerned’ about trade conflicts, 88% are specifically uneasy about the trade issues between China and the US. Ninety-eight percent of US CEOs and 90% of China’s CEOs have voiced these concerns.

Of China’s CEOs who are ‘extremely concerned’ about trade conflicts, a majority are taking a strong reactive approach, with 62% adjusting their supply chain and sourcing strategy. Fifty-eight percent are adjusting their growth strategy to different countries.

This year’s survey took a deep dive into Data & Analytics and Artificial Intelligence (AI), two key areas on leaders’ radar, to get CEOs’ insights on the challenges and opportunities.

This year’s survey revisited questions about data adequacy first asked in 2009. It was found that CEOs continue to face issues with their own data capabilities, resulting in a significant information gap that remains ten years on. Despite billions of dollars of investments made in IT infrastructure over this time period, CEOs report still not receiving comprehensive data needed to make key decisions about the long-term success and durability of their business.

Leaders’ expectations have certainly risen as technology advances, but CEOs are keenly aware that their analysis capabilities have not kept pace with the volume of data which has expanded exponentially over the past decade. When asked why they do not receive comprehensive data, CEOs point to the ‘lack of analytical talent’ (54%), followed by ‘data siloing’ (51%), and ‘poor data reliability’ (50%) as the primary reasons.

When it comes to closing the skills gap in their organisation, CEOs agree that there is no quick fix. Forty-six percent see significant retraining and upskilling as the answer, with 17% also citing establishing a strong pipeline directly from education as an option.

Ionuț Simion, Country Managing Partner, PwC România: “As technological changes continue to disrupt the business world, people with strong data and digital skills are in even higher demand and increasingly harder to find. That said, the need for people with soft skills is also critical, which is why business, government and educational institutions need to work together to address the demands of the evolving workforce.”

Eighty-five percent of CEOs agree that AI will dramatically change their business over the next five years. Nearly two-thirds view it as something that will have a larger impact than the internet.

Despite the bullish view on AI, 23% of CEOs currently have ‘no current plans’ to pursue AI, with a further 35% ‘planning to do so’ in the next three years. Thirty-three percent have taken ‘a very limited approach’.  Fewer than 1 in 10 CEOs have implemented AI on a wide scale.

Ionuț Simion, Country Managing Partner, PwC România: “Although organisations in Asia-Pacific, North America, and Western Europe have reported comparable levels of AI adoption, we see a growing divide over their belief about the potential impacts of AI on society and the role government should play in its development.”