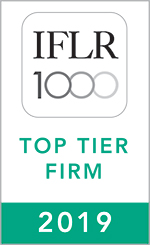 Țuca Zbârcea & Asociații sets the seals on top rankings in the most recent edition of IFLR 1000 released in London, for yet another year.

Țuca Zbârcea & Asociații reconfirms its top-notch position in the financial and corporate market, according to the latest rankings of IFLR 1000. The firm achieved tier one rankings in all four areas of practice undergoing research this year: Banking and finance, Capital Markets, Mergers & Acquisitions, and Project Development. Moreover, 13 lawyers at the firm were praised for their professional activity.

IFLR1000 is the guide to the world’s leading financial and corporate law firms and lawyers. Their first rankings were published in 1990 and they currently research over 120 jurisdictions worldwide.