Romania’s most active transactional lawyers were awarded last night for their achievements in some of the most spectacular M&A deals concluded in 2017 and in the first half of 2018. Lawyers’ Awards Gala celebrates and recognises legal excellence across various industries, from agriculture, retail to FMCG, energy, real estate, IT&C etc. A total of ten awards were handed out, with ȚUCA ZBÂRCEA & Asociații scoring a double victory. The firm scooped the prize for The Largest Deal in Agribusiness Sector and the prize for The Largest Deal in Retail, respectively. The firm received a total of five nominations at this year’s Lawyers’ Awards Gala. 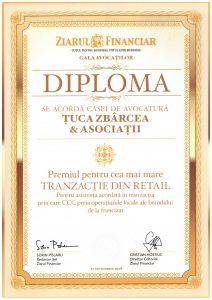 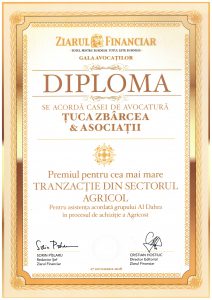 According to the organisers, the acquisition of Agricost by Al Dahra stands out as the most significant transaction in the agribusiness sector in 2017-2018. 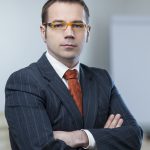 Dan Borbely, Partner at ȚUCA ZBÂRCEA & Asociații and leading lawyer in this deal: “It was a complex and important deal, and I would like to make use of this opportunity to thank my colleagues for the role they played in this transaction. It’s a significant concession contract regarding the largest arable farm in Europe”.

Furthermore, the acquisition of all retail outlets operating under the CCC brand in Romania from Peeraj Brands International SRL was named the largest deal in retail for 2017-2018.

Dan Borbely, Partner at ȚUCA ZBÂRCEA & Asociații who acted for Peeraj Brands International SRL on this deal: “My team made the deal run smoothly and I am truly grateful for their dedication and support throughout. It was an interesting transaction, posing no major concerns for the parties involved. The CCC franchise had been developed up to the point where it was only natural for the owner (CCC) to buy the Romanian franchise operated under its brand”.