● China to overtake US as leading blockchain developer within three to five years.

The new research from PwC – Blockchain is here. What’s your next move? – surveyed 600 executives in 15 countries and territories, on their development of blockchain and views on its potential.

As blockchain rewires business and commerce, the research provides one of the clearest signals yet of organisations’ fear of being left behind as blockchain developments accelerate globally opening up opportunities including reduced cost, greater speed and more transparency and traceability.

A quarter of executives report a blockchain implementation pilot in progress (10%) or fully live (15%). Almost a third (32%) have projects in development and a fifth (20%) are in research mode.

The US (29%), China (18%), Australia (7%) are perceived as the most advanced currently in developing blockchain projects. However within three to five years, respondents believe China will be have overtaken the US (30%), shifting the early centre of influence and activity from the US and Europe.

The survey reflects the early dominance of financial services developments in blockchain with 46% identifying it as the leading sector currently and 41% in near term (3-5 years). Sectors identified by respondents with emerging potential within 3-5 years include energy and utilities (14%), healthcare (14%) and industrial manufacturing (12%).

Blockchain’s biggest benefits will be developed and delivered through shared industry wide platforms. But the study notes that this won’t happen without industry specific companies – including competitors – agreeing common standards and operating together.

Despite the technology’s potential, respondents identified trust as one of the biggest blockers to blockchain’s adoption. 45% identified it as blocker to blockchain adoption, while 48% believe it is regulatory uncertainty. Concern about trust amongst users is highest in Singapore (37%); UAE (34%) and Hong Kong (35%), reflecting in part the dominance of financial services in blockchain development. Concern about regulatory uncertainty was highest in Germany (38%); Australia (37%) and the UK (32%). 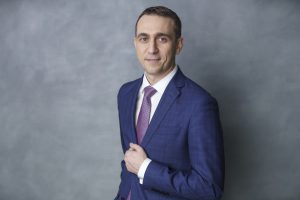 “Creating and implementing blockchain to realise its potential is not an IT project. It’s a transformation of business models, roles and processes. It needs a clear business case, an ecosystem to support it; with rules, standards and flexibility to deal with regulatory change built in. Transparency and traceability of transactions needs to be a common desideratum of companies involved in developing blockchain, because only such a step would help trigger wide adoption. On another hand, we see necessary a tighter cooperation between the developers of blockchain and regulation authorities in order to secure increased trust and to help create a regulation framework that takes into consideration the particularities of this technology. Once these two issues of blockchain have been addressed we believe that we’ll see development of new applications and an easier adoption” says Ionuț Sas, Partner, Tax and Legal Department, PwC Romania.

One in three of those respondents who reported little or no involvement with blockchain cited the reason for a lack of progress as cost (31%), uncertainty over where to start (24%) and governance issues (14%).

The study identifies four key areas for focus in the development of internal or industry wide blockchain platforms:

1. Make the business case: organisations can start small, but need to set out clearly the purpose of the initiative so other participants can identify and align around it.

2. Build an ecosystem: Participants should come together from different companies in an industry to work on a common set of rules to govern blockchains. Of the 15% of survey respondents who already have live applications, 88% were either leaders or active members of a blockchain consortium.

3. Design deliberately around what users can see and do: Partners need rules and standards for access permissions. Involving risk professionals including legal, compliance, cybersecurity – from the start will ensure blockchain frameworks that regulators and users can trust.

4. Navigate regulatory uncertainty: The study warns that blockchain developers should watch but not wait as regulatory requirements will evolve over the coming years. It’s vital to engage with regulators to help shape how the environment evolves.

2. 14% had no activity in place and 7% have paused their development.

3. Of the 15% who already have live applications, 88% were leaders, or active members of consortia who were responsible for the blockchain infrastructure supporting their application. Companies that take a leadership role in a consortium have principal funding and control considerations, including IP ownership.

4. Membership / Participation:Respondents also reported on the management of their use cases. Of those use cases, 40% have restricted access to participate (permissioned), and all participants are pre-qualified: 34% allow anyone to participate (permissionless): 26% take a hybrid approach (some data is private; some is open to everyone). Considering access to the blockchain, 40% are private, 28% hybrid and 32% have public access to read transactions on the blockchain.

At PwC, our purpose is to build trust in society and solve important problems. We’re a network of firms in 158 countries with more than 236,000 people who are committed to delivering quality in assurance, advisory and tax services.