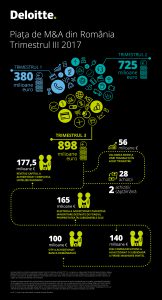 Bucharest, 9 October 2017. The M&A market in Romania has reached 898 million EUR in Q3, according to public sources and disclosed transactions, an analysis performed by Deloitte Romania has revealed. Twenty-eight deals were announced in Q3, including those with undisclosed value, representing two deals a week on the average. Compared to the similar period last year, the value of the transactions has tripled in Q3 while their number grew by 20%.

“During the first nine months of the year, the M&A market has already reached two billion EUR and what is even more remarkable is that the total value of the market was not reached due to any mega-deals but due to six deals between 100 – 500 million EUR. Historically, the last quarter is the most important of the year and given the transactions which are still under negotiations, we expect yet another billion EUR to be put on the market,” said 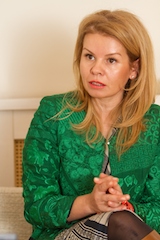 The fact that five deals over 100 million EUR each have been announced in Q3 and four of them came to fruition is a performance which has not been achieved for the past two years.

Revetas Capital acquisition of the Radisson Hotel and its hospitality complex in a competitive process for a price of 177.5 million EUR was the quarter’s largest deal.

“The price for the landmark Bucharest hotel will be a reference in the 5-star hotels segment where we expect further deals in the next period,” Filipescu added.

Electrica’s acquisition of the minority participations held by Fondul Proprietatea in its subsidiaries, a deal worth 165 million EUR, the second largest of the quarter, is the long awaited conclusion of a transaction under discussion for several years and part of FP’s divestment program.

The acquisition by Digi Communications of the Hungary-based subsidiary of Invitel is a remarkable outbound transaction, given the 140 million EUR size and the scarcity of Romanian companies acquiring abroad.

OTP’s acquisition of Banca Romaneasca with an equity value widely mentioned to be around 100 million EUR is the largest bank transaction in the last two years and it reflects the continuous consolidation of the Romanian banking sector.

Deloitte Romania has been involved throughout the quarter on the sell-side in several transactions that are still under ongoing. On the buy-side, Deloitte was a due diligence advisor in three transactions announced during the quarter that are still pending completion: Sigma Alimentos – Caroli Foods Group; QuEST Engineering – IT Six Global Services as well as Global Trade Center – Cascade Office Building. 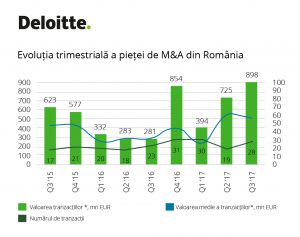