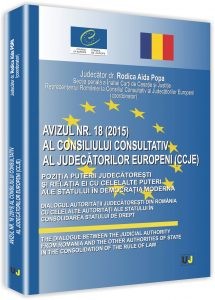 The Author: “The Opinion no. 18 of Consultative Council of European Judges was on the agenda of a round table meeting on June 10th 2016. ”The dialogue of the judicial authority of Romania with the other state authorities with a purpose of consolidation the rule of law. Realities and Perspectives” held at the Faculty of Law, Bucharest University organised by the Romanian Representativie at the Consultative Council of European Judges within the European Council in partnership with the Society of Legal Science, with Publishing House “Universul Juridic” and the Faculty of Law from Bucharest University.

To this important debate professors and law practicioners were invited, they have offered through their contributions a concrete dimension over the reality of the rule of law from Romania, model of a modern democracy.

I believe that this volume expresses through its main ideas the state of fact of the rule of law and the balance of the three powers in the model of democracy of nowadays, but it also anticipates a change of paradigm through the given proposals, that is giving trust and cooperation, thanks to the ongoing dialogue among them, so that the public service of each of them may assist to provide the superior interest of the Romanian citizen, now part of the European family.“