Productivity growth in Ireland and Spain – the top performing peripheral economies in the Eurozone – has outstripped that in Germany, France and the Netherlands, say PwC economists.

The figure to the right shows that Eurozone real GDP per hour worked – a measure of labour productivity – grew at a rate of around 2% in the three years to 2015. And a closer look a 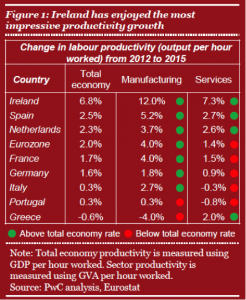 t the data shows that:

Peripheral economies like Portugal and Greece have not managed to significantly increase their labour productivity levels despite carrying out reforms over the period.

But sectoral fortunes have been mixed. PwC analysis shows that in several Eurozone economies, productivity in the manufacturing sector has grown at a relatively rapid rate. Says Richard Boxshall, Senior Economist, PwC:

“This makes sense, as most manufactured goods are tradeable and so exposed to competitive forces, all of which incentivise businesses to become more efficient in a shorter period of time. Also, new automated technologies tend to be most readily applicable in the manufacturing sector – though they can also apply to more routine services activities.”

“There are, however, some outliers –such as Ireland, for example, where the double-digit productivity growth rate in its manufacturing sector could be explained by its highly efficient pharmaceutical industry, which accounts for around a quarter of all goods exports.”

But what about the rest of the economy? Around three quarters of the Eurozone’s economic output, and of total hours worked, is in the services sector; this makes it the biggest influence on economy-wide labour productivity. The figure above shows that, with the exception of Greece, labour productivity growth in services lagged behind the manufacturing sector. Adds Richard Boxshall:

“We think there are two main reasons for this trend. First, unlike for the goods market, the EU still has a lot to do to complete the Single Market for services. A possible implication of this could be that businesses adjust to competitive forces slower than they would have under a freer regime, leading to slower productivity growth.”

“Second, there are some sector-specific reasons that could also explain this trend. For example, much of the services sector is relatively labour-intensive, with less scope for gains from technological advances and mechanisation. The financial services industry has also been subject to more stringent regulations after the crisis, which may be justified in terms of resilience and reducing systemic risk to the wider economy, but could also be having some adverse effect on productivity by restricting the activities they can undertake or deterring innovation.”

Meanwhile, figures reveal that the Eurozone economy grew faster than the US in the first quarter of 2016. But PwC analysis shows that the economic – and to a greater extent, the labour market – recovery has been uneven. For example, the range of unemployment rates in the Eurozone at this stage of the recovery is the highest it has ever been compared to past recoveries. Says Richard Boxshall:

“We think the key driver of this variation in economic fortunes is structural in nature and related to differences that exist across labour, capital and product markets in the individual Eurozone economies. But the recovery currently underway in the Eurozone has given policymakers an opportunity to implement reforms and reduce some of these differences.”

About PwC:
PwC firms help organisations and individuals create the value they’re looking for. We’re a network of firms in 157 countries with more than 208,000 people who are committed to delivering quality in assurance, tax and advisory services.