Once again the global economy faces a dangerous cocktail of risks including slowing growth in China, a strong dollar, and low commodity prices.

But this time, the emerging market economies look the most vulnerable, while advanced economies are still struggling to escape the low economic growth environment almost a decade on from the global financial crisis, say PwC economists.

Figure 1 above shows that economic growth has slowed in six of the seven largest emerging markets (the ‘E7’) compared to previous trend growth rates. Only India grew faster in 2015 than its medium-term average rate. Brazil and Russia are contracting.

So what has driven this deterioration in their economic outlook?

China’s economy is slowing and commodity price projections are falling:

After growing at above 8% from 2000 to 2011, the Chinese economy slowed down to just under 7% growth last year and PwC economists expect this to decline further to around 6% in 2017.

“Even though some of this trend was expected, the slowdown has been faster than most commentators anticipated a couple of years ago,” says Richard Boxshall, Senior Economist, PwC. “Risks remain weighted to the downside even though, according to our latest CEO Survey, Chinese CEOs remain more confident than their US counterparts on their own companies’ future revenue growth.”

The main, direct effect of China’s slowdown in growth is being felt through trade. Brazil and Indonesia remain the most exposed to China here. For example, the direct impact of a 10% decrease in Indonesia’s goods exports to China would be to lower its GDP by around 0.2 percentage points.

The slowdown in China is also having an indirect impact on other emerging economies through lower commodity prices as Chinese demand falls. Russia, Indonesia, Brazil and, to a lesser extent, Mexico are all net primary commodity exporters and as such have suffered from this effect.

Foreign currency debt is a source of weakness for some emerging economies:
The strength of the US dollar coupled with the scale of dollar denominated debt continues to be an area of concern for some emerging market businesses, households (and to a lesser extent governments), as shown in Figure 2 below. PwC’s economists conclude that:
– Brazil has joined Turkey in being classed as ‘highly vulnerable’ as far as its foreign debt position is concerned
– China’s external debt continues to remain relatively insulated from the effects of a strong dollar because foreign-currency denominated debt makes up a small proportion of its overall economy, although some individual Chinese enterprises are more exposed here.
– Indonesia, Mexico, Russia and India which are four of the world’s seven largest emerging economies, fall somewhere in the middle and so present a mixed picture in terms of their exposure to the dollar –though the first three of these have other exposures here relating to commodity prices and/or reliance on exports to China as noted above. India seems more secure and currently looks to be the strongest of the large emerging economies. 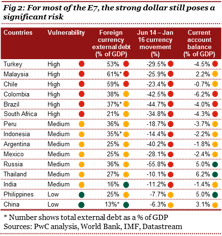 Policymakers do have some space to provide support to the economy:

PwC’s analysis shows that:
– Some of the E7 have fiscal space as they have relatively small budget deficits and a low level of relative debt. Even in Mexico and Russia, where the deficit is over the 3% of GDP threshold, public debt is below 60% of GDP. Policymakers could use fiscal stimulus to boost demand if economic growth continues to slow.
– Things are less clear cut with monetary policy as inflation remains high in Brazil, Russia and Turkey for example, but is below target in China. However, with interest rates in the emerging economies not as low as in the advanced economies –the lowest policy rate in the E7 is in Mexico at 3.25% –policymakers do have the room to provide monetary stimulus to the economy if they so decide.

PwC’s Richard Boxshall concludes: “Overall, the short term economic outlook for the emerging economies has deteriorated even though many retain considerable long-term potential. We therefore recommend that our clients stress test their business plans against a lower-than baseline growth scenario for major emerging markets over the next few years.”

About PwC
PwC firms help organisations and individuals create the value they’re looking for. We’re a network of firms in 157 countries with more than 208,000 people who are committed to delivering quality in assurance, tax and advisory services. Find out more and tell us what matters to you by visiting us here.