The London IPO pipeline still contains attractive investment opportunities, but increases in the number of postponed or cancelled deals are expected in 2016 as companies battle against market volatility and challenging market conditions, according to PwC’s latest IPO Watch. 61 IPOs were postponed or withdrawn in 2015 (compared to 49 in 2014), 44 of which were due to market conditions. 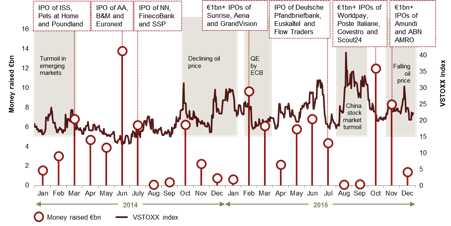 As we start 2016, a cold chill has descended across pretty much every market globally – this is certainly a more complex climate to that of 2015 and indeed 2014. We rounded off last year with six bumper IPOs, which really saved the day from an annual IPO proceeds standpoint and actually took us to the highest IPO proceeds since 2007”, stated

“This year, I would expect to see the number of companies coming to market to marginally decline, as investors continue to scrutinise investment opportunities and those that can wait, will wait. Having said that, I think 2016 proceeds will be bolstered by the continuing trend of mega deals -the too-big-to-miss-out sentiment – and that we will see a recovery towards the middle of the year. The effect on Europe of the expected election paralysis in the US market remains to be seen, as well as the impact of the fall on the Chinese stock-exchange”, added Diana Coroabă.

“In Romania, we’ve seen last year five new listings on the AeRo market segment, mostly small IT companies. However, the proceeds from these listings were much smaller than in 2014, when the state-owned Electrica power company was listed on the Bucharest Stock Exchange. It is clear that the Romanian capital market still needs the input of the state authorities if it is to attract major IPOs and to grow into the financial hub of South-Eastern Europe as one should expect, giving Romania’s economy size in the region. In this respect, it is much awaited the listing of Hidroelectrica, as well as other state owned companies, such as the Bucharest International Airport”, said Daniel Anghel, Partner, Tax and Legal Services, Public Sector Leader, PwC Romania.

Number of €1bn+ IPOs per year

“As the curtains closed on 2015, it was really the giant IPOs of Aena, ABN AMRO and Worldpay, all raising €3bn plus and with good after market performance, which made headlines. These larger IPOs will continue to be a dominant feature in 2016’s London IPO market, with Clydesdale Bank the first bigger listing of this year”, said Ana-Maria Butucaru, Director, Assurance Services for the Financial Sector, PwC Romania.

“Looking ahead, 2016 will feature companies demonstrating strong and predictable growth stories with more focus than ever before on the longer term outlook. The technology and financial sectors will be strongly evident, but the IPO market will have to overcome the adversity of rock bottom oil prices, increasing interest rates and continued exchange rate volatility”, concluded Ana-Maria Butucaru.

About PwC:
PwC firms help organisations and individuals create the value they’re looking for. We’re a network of firms in 157 countries with more than 208,000 people who are committed to delivering quality in assurance, tax and advisory services. Find out more and tell us what matters to you by visiting us here.